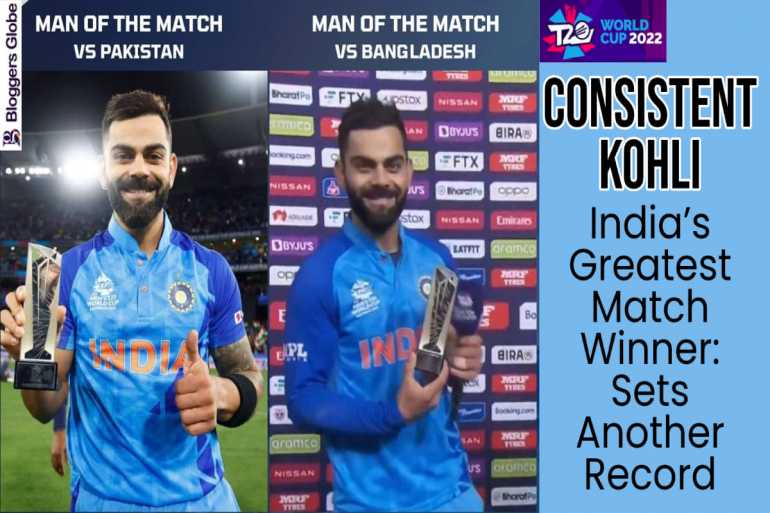 IND Vs BAN, Virat the most successful batsman in T20 World Cup, broke this record of Mahela Jayawardene

India defeated Bangladesh by 5 runs in a rain-hit Super-12 match of the T20 World Cup 2022 in Adelaide on Wednesday. With this win, Team India has reached the first position in the points table. Whereas the Bangladesh team is almost out of the semifinal race.

Batting first, Team India scored 184 runs for the loss of 6 wickets in 20 overs thanks to the strong half-century innings of KL Rahul and Virat Kohli. India set a target of 185 runs in 20 overs in front of Bangladesh in Group 2, which was reduced to 151 runs in 16 overs due to rain. Bangladesh could only manage 145 runs in reply.

In this match, Virat Kohli recorded a big record in his name. He has become the highest run scorer in T20 World Cup history. Kohli achieved this feat when he scored 16 runs against Bangladesh in Adelaide. Virat has overtaken former Sri Lanka captain Mahela Jayawardene.

He follows Jayawardene as the second batsman to accomplish this. Jayawardene was now passed by Kohli in the match against Bangladesh. One of the few batsmen with centuries in all three formats is Kohli. Before the match against Bangladesh, Kohli played 113 T20 Internationals and amassed 3868* runs at an average of 52.27 and a strike rate of 138.34. He recorded one century and 35 half-centuries throughout this time.

Virat Kohli: A Player Beyond Excellence

From Sachin to Virat, 6 Indian cricketers and their bizarre superstitions