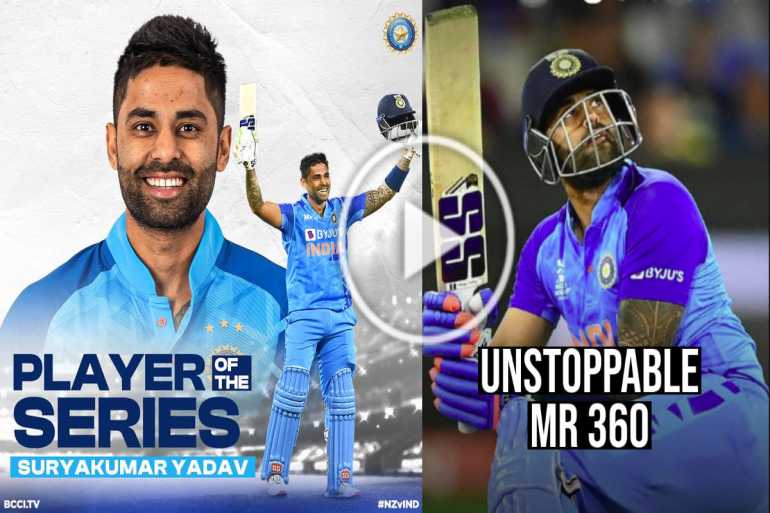 After the third and final game in the T20I series between Team India and New Zealand was postponed due to rain in Napier on Tuesday, Team India won the three-match series 1-0. When the players were forced off the field due to heavy rain, the Men in Blue were chasing 161 and were 75 for 4 in 9 over. The players were unable to restart play because of the rain, but as India had already reached the DLS par score, the official chose to call it a tie.

Suryakumar Yadav continued his outstanding run of form with the bat and bagged the Player of the Series award #TeamIndia | #NZvIND pic.twitter.com/OPmSnMFhLv

The in-form hitter Suryakumar Yadav received the Player of the Series award for his exceptional batting performance in both games. He only scored 13 in the last T20I, in contrast to his perfect 111 in the previous match, which India won by 65 runs. He finished the series as the highest scorer with 124 runs over the course of two games.

“He’s had a terrific year. He’s been in superb form and that 100 that we saw, 17 deliveries is all that took him to complete his second fifty. He was not even aiming for a hundred but it was just that kind of zone, and he was hitting all around the park. Mr. 360 degrees is making it count now.”

Let us tell you that Suryakumar Yadav rocked the bat in the T20 World Cup. Now he is batting fast against New Zealand. In the second T20, he played a stormy century inning of 111 runs off 51 balls. During this, his strike rate was 218. Surya had hit 11 fours and 7 sixes in his stormy innings of 111 runs.

On the basis of Surya's blistering century, Team India won this match by 65 runs.

SKY has no limits ...he is from another planet.
Absolutely amazing to watch .
Congratulations 2nd T20 hundred. pic.twitter.com/Z49oDD33T9