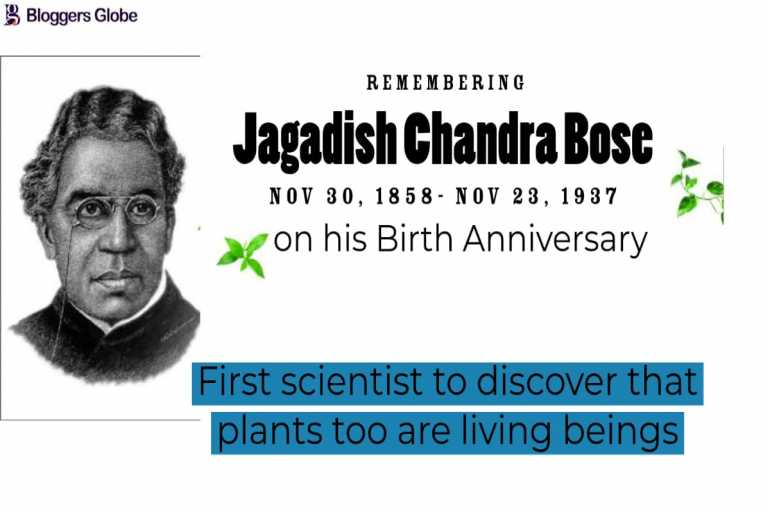 The well-known physicist Jagdish Chandra Bose, who introduced India's scientific literature and potential to the nation and the globe, was born on this day a century ago. His contribution to science has never been forgotten. No one realized that his father, Bhagwan Chandra Basu, was a sub-magistrate and social worker during the British era when he was born on November 30, 1858, in Faridpur (now in Bangladesh), a kid from a Kayastha family who would one day become the pride of the nation.

Because of his early passion for science, he decided to pursue a medical degree in London when he was just 22 years old. However, he soon gave up on this plan and transferred to Cambridge University to finish his studies in physics. He started teaching physics at Presidency College after returning home, and during this time he rose to become a well-liked professor because of his writing, charisma, and expertise. He also frequently delivered research papers as part of his teaching duties.

He had discussed radio wave inducement, or the communication of radio waves, for the first time, and he had also demonstrated it through his experiment. Bose said that plants had life inside of them and that they communicate using electricity rather than chemicals. He also claimed that as plants manufacture food for themselves, a lot of energy is released.

He was the one who created the "Crescograph," which is how Plants communicated. He was the one who first revealed the striking similarities between plant and animal tissues. In addition to this, he wrote a lot of science-based stories that were also highly well-liked, earning him the moniker "the father of Bengali science literature." For 21 years, he served as the Bose Institute's director general. His extraordinary abilities have earned him the title of India's first scientist in the contemporary era.