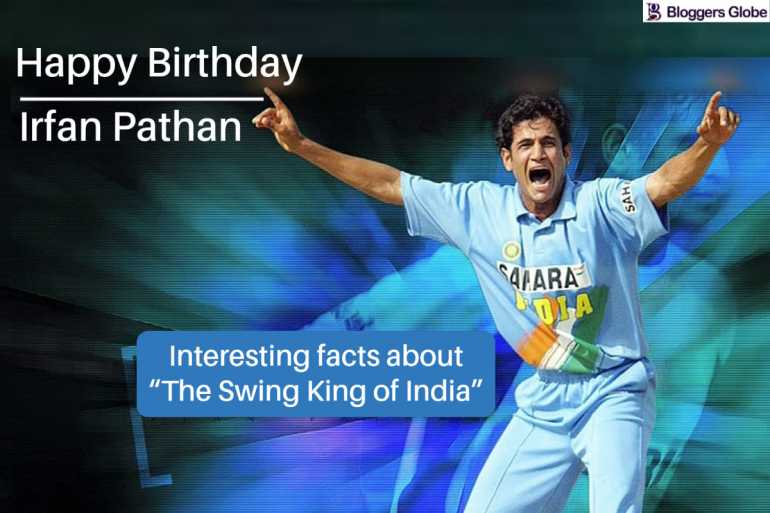 The Swing King of India

Irfan Pathan, a former all-rounder for Team India, was born today. Born in the Gujarat city of Vadodara in 1984, Irfan is one of the best swing bowlers from India. Irfan Pathan and his brother Yusuf Pathan played cricket together as kids, and as they grew older, both siblings earned spots on the Indian national team.

Although Irfan Pathan was younger than Yusuf, he succeeded his brother in international cricket. Irfan Pathan was more important to the squad because of his brilliance in both bowling and batting. Irfan and Yusuf have collaborated on numerous occasions, notably the 2007 ICC World T20 Finals, where India won the championship.

1. Guddu is a pet name for Irfan Pathan.

2. Irfan's father Mehmood desired that he and Yusuf become Islamic academics, but they developed a love for cricket and went on to represent India.

3. Of course, Irfan Pathan has everything now, but there was a period before Makar Sankranti when Irfan Pathan had to sell kites. Irfan Pathan stated in an interview that selling kites was how he made his first money. Irfan Pathan claimed to have made Rs 79 from the sale of about 250 kites.

5. Irfan Pathan, who has taken 100 wickets in the Test format and a further 173 wickets in the ODI format, is one of India's most productive wicket-takers.

6. In ODI cricket, he holds the two-fold record for the fastest 1,000 runs and the fastest 100 wickets. He achieved 100 wickets in ODIs more quickly than any other Indian bowler.

7. Only three bowlers have a hat-trick in Test cricket, and Irfan Pathan is one of them. he did this great feat against Pakistan

8. He received the "ICC Emerging player of the Year" award from ICC for his exceptional performance in his first season.

9. Following a comparison between Wasim Akram and Pathan during the 2006 India tour of Pakistan, current Pakistan coach Javed Miandad remarked, "Bowlers like Irfan is in every street in Pakistan." Irfan scored a hat-trick in Karachi the very following game, making national headlines.

10. "Cricket Academy of Pathans" is a coaching facility that Irfan and Yusuf Pathan have jointly established. The academy is supervised by former Indian coach Greg Chappell and 1983 World Cup-winning captain Kapil Dev.

11. Pathan is a gifted athlete with several skills. He took part in "Jhalak Dikhlla Ja" in 2015 and impressed viewers with his passable dancing abilities.